I’ve recently updated my What page, so I thought I would also copy it here as a post for comment. 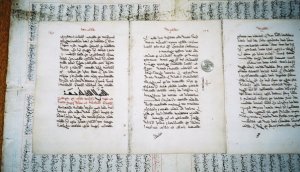 Ad fontes is a Latin phrase meaning ‘to the sources’, a favourite motto of Renaissance humanism. I am particularly thinking of Erasmus of Rotterdam with this phrase, recalling his invaluable biblical scholarship. Renaissance humanism both laid the groundwork for the Reformation and re-engaged with the writers of the early church.

The term ‘humanism’ is only applied retrospectively to this movement. The Oxford English Dictionary dates its earliest meaningful occurrence in the French humanisme of 1765, with the meaning of ‘love of humanity’, with a German reference to Humanismus from 1808 being used to describe the classical syllabus of the gelehrten Schulen (‘learned schools’, grammar schools). Our universities’ humanities divisions and faculties are named after this understanding of humanism. It didn’t take long for the term to acquire two more widely applied senses: the intellectual movement of the Renaissance and a philosophy oriented toward the human. There are a few sparse uses of the term ‘humanism’ to refer to a doctrine that Jesus Christ has a merely human nature (adoptionism, ebionitism and perhaps unitarianism), and Schiller used the term as a name for pragmatism; these are not my doctrines, nor my intended meaning.

Renaissance humanism found expression in internationalism and anti-nationalism, and egalitarianism and anti-clericalism. Although intellectuals, Renaissance humanists began the move towards translating scripture into the vernacular, using the revolution in printing to put biblical texts into a greater number of hands. I am drawn to this path of intellectual egalitarianism — recognising the intellectual capability in all, not confined to some intelligentsia — and this echoes the writings of Gramsci.

Today, the term ‘humanism’ has mostly become a shorthand for secular humanism, practised by atheists and agnostics. As such, it forms an important ethical framework that is not determined by religion. However, this does then beg the question whether or not humanism is the religion of humanity, in the same way that Buddhism can be understood as an atheistic ethical framework and religion (the difference is that the latter has a clear devotional practice absent from humanism).

Christian humanism can be both intellectual questioning and ethical framework. The two are linked, as Christian humanism recognises the necessary function of human intuition in religious experience and human reason in religious interpretation, however high our view of divine revelation. Thus, religious revelation can no longer be the dismal curtain behind which the church hides its elitism, patriarchalism, racism and homophobia; these are the functions of human will not God’s will.

As Christian humanism stands also against individualism, being about our collective humanity, it has a necessary political corollary. I understand this as being a socialism that is both revolutionary and democratic (in that it is fundamental change based on absolute popular sovereignty), standing with the poor, weak and oppressed in response to Jesus’ Gospel.

A Biblioblog about imitation, the Biblical Narratives, and the figure of Jesus